Rheinmetall to Supply the Indonesian Army With Leopard 2 Simulators 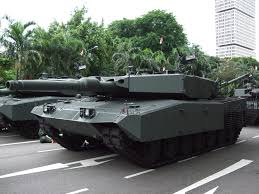 Indonesia has awarded Rheinmetall with an order for state-of-the-art simulation technology for training tank crews.

By 2015 Rheinmetall will have produced a driving simulator and gunnery simulator for training Indonesian Leopard 2 personnel. The order is worth several million euros.

The Leopard Gunnery Skills Trainer (LGST) and Driver Training Simulator (DTS) are specifically designed for training Leopard 2A4 tank crews, and will primarily be used for sharpening the gunnery and combat skills of commanders, gunners, loaders and drivers.
Rheinmetall’s ultramodern TacSi technology features prominently in these simulators.

Furthermore, as a leading supplier of defence technology systems, the Group is able to draw on its unsurpassed knowledge of the Leopard 2 and longstanding competence in the field of simulation, now coupled with the advantages offered by serious gaming technologies.

As a result, Rheinmetall simulation products combine the virtues of the game engine in regard to visualization with the high-quality training outcomes its simulators assure.

A further advantage of the Rheinmetall system: several simulators can be networked to enable tactical training at platoon and company level. In terms of design, the simulators just ordered by Indonesia are similar to systems that have already proven highly effective in day-to-day military training operations.

For example, in recent years Rheinmetall has supplied the Canadian armed forces with a total of 18 gunnery simulators and two driver training simulators for Leopard 2 tank crews. All of these systems have been up and running since March 2014. These two contracts underscore once again the global trust placed in Rheinmetall’s simulation technology and Leopard 2 expertise.